The Elk Rut: A Spectacular Season of Sparring

The Elk Rut: A Spectacular Season of Sparring

The elk rut, also known as the mating season, is one of the most spectacular natural events to witness in the wild. During this time, bull elk can be seen engaging in fierce sparring matches as they compete for the attention of the females. In this article, we will explore the behavior of elk during the rut season and the role of sparring in the mating process.

The elk rut typically takes place between late September and early November, depending on the location. During this time, bull elk will grow large antlers, which they use to intimidate and fight off other males. The bulls will also develop a strong musk odor, known as bugling, which attracts females to their location.

The Role of Sparring in the Mating Process

Sparring is an important part of the elk rut as it helps to establish dominance among the male elk. Dominant males are more likely to attract females and successfully breed. The sparring matches between males can be quite intense, with the bulls using their antlers to push and shove each other. These matches can be heard from a distance, as the bulls use their antlers to make a loud clashing noise. The bull elk will also use their antlers to display to the females. The bull will hold its head high and prance around, displaying its antlers to any females that are nearby. The females will then choose the male with the most impressive antlers and the best physical condition to breed with.

The elk rut is a truly spectacular event to witness in the wild. The sight of bull elk sparring and displaying to females is a truly impressive sight. The sparring matches between males help to establish dominance, with the dominant males being more likely to attract females and successfully breed. The elk rut is a reminder of the powerful and majestic nature of these animals and the importance of preserving their habitat.

Some Fun Facts About Bull Elk

Check out our Murals, Splits, and Triptych Art Prints in the BoInsogna.com Gallery

Plus Buy a Print. Plant a Tree.

Our gallery partner printer plants one tree for each print sold supporting Trees for the Future, a non-profit. 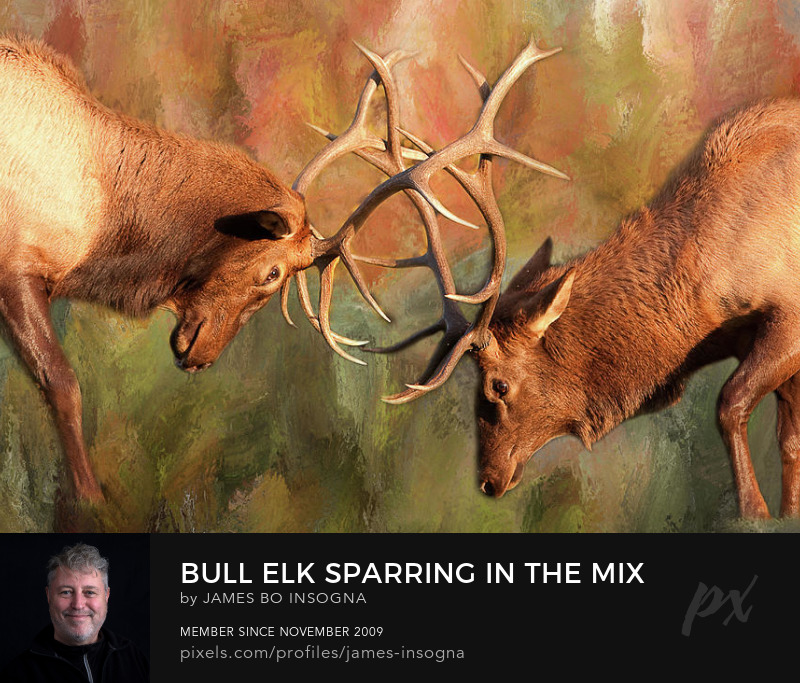 Sunshine On An Autumn Day

Special Place In The Woods Print

DISCLOSURE:
This post contains affiliate links, which means that if you click a product link and buy anything from the merchant, we will receive a small commission fee. The price you pay remains the same, affiliate link or not. Thank you!

All images are under the (C) copyright all rights reserved by photographer James Insogna, and may not be used, duplicated, or altered without written permission. Images on this site are not of public domain.